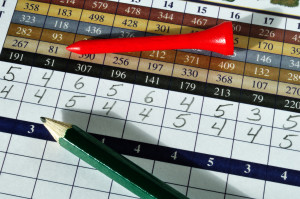 Whether you’re a seasoned pro or just a beginner, learning the rules of golf is tricky business. Even once you think you’ve got them all memorized and understood, some can still sneak up on you. With that said, we’re going to take a look at some of the lesser known rules in the game, some of which are rather quirky to say the least. As you read these you may find yourself surprised at which ones you already knew about, and the ones you were completely unaware of!

Don’t Count on the Current to Help

Chances are at some point you’ve hit your ball into the water, but did you know that according to rule 14-6 if you hit your ball into water that is moving (a current) you are actually allowed to take a swing at the ball, even if it’s moving? Now here’s the catch, you can’t delay your swing and wait for the current to move the balls’ position so that it works better for you.

Dealing with the Bunker

Here’s a rule that applies to balls that are hit into the dreaded bunker. At times, the ball becomes buried in the sand, so much so that you may not be able to find it right away. According to rule 12-1b you are allowed to move the sand so that you can find your ball, but you can’t move the ball obviously. At the same time if you end up moving the sand that is burying the ball, you need to put the sand back on it before you hit it.

Unable to Identify the Ball

Occasionally you may find yourself asking whose ball is whose. In that case, if you can’t guarantee you know which ball belongs to you, then both you and the other player will have to go back to the previous shot you were playing as well as take a penalty. This is according to rule 12-2. In other words, be sure that whomever you’re playing with has clear markings on their ball, as do you.

Check the Amount of Clubs

Here’s a funny one that many people aren’t aware of. Often people carry extra clubs. Perhaps they use different clubs for different situations, maybe they’re trying out a different brand, whatever the reason the rules clearly state that you are only allowed to have 14 clubs in your bag at one time.

The ball doesn’t always land in the most ideal place, sometimes there are obstacles around it or in its path. Regardless you cannot alter the space around the ball, this means moving branches, patting down the green, whatever it may be. The ball must be played where it lies and with whatever hazards and obstacles may be in the way, no matter how difficult it makes the shot. It’s part of the challenge after all!

The Unspoken Rules of Play

Golf has always been thought of as a classy and dignified sport, there are certain things that don’t take place on a golf course because it’s just not part of the sport. While they aren’t necessarily things that will appear in the rule book, anyone who is familiar with the game knows about these unspoken rules.

These are things such as being a good sport, even though you can get angry about your shot it’s never okay to have a meltdown on the green, yelling, and worst of all throwing a club. Other rules such as being respectful of the course and keeping it clean, not yelling or using a distracting voice, and of course letting those groups that are faster play through.